Just as many other peers of mine born on the 80s, I was born in the middle of Iran-Iraq war. A lot of people got killed during those miserable 8 years. So the government had already started encouraging families to have more children to balance the population.

Some years passed, and I grew up. I went to the elementary school. I remember there were 48 of us in one single class room, and usually there was a challenge among the kids to *win* by proving there are more students in their classroom than the others!

All schools were full of kids, and recovering from a war, the country didn’t have good facilities for that young population.

I was growing up and it was time to enter the secondary school. Good schools had to be selective among all those kids and one had to be either smart or hardworking, or have some VIP relative in charge (including having a close family member killed in the war or a veteran, etc.). So it wasn’t easy to be able to study at a good school, but I could manage to enter one with difficulties. There were 3o of us in each classroom this time, which was better. But in three years, we had the high school upcoming, and another couple of big exams for the top schools, and still a huge population trying to occupy the seats. I could manage this, too, and now there was only one more hurdle in 4 years to enter university. This one was pretty huge, being held nationally all over the country among  approximately 1,200,000 students in different fields, and barely less than 10% could enter good universities.

Four years passed and we graduated. Everyone was trying so hard to pass the entrance exam for MSc. this time, but it wasn’t because of love of studying! It was only because there were no jobs for all those graduates, so studying could be an occupation. This had continued until today, and there are still graduates who work in low rank, unrelated, ordinary posts or they’re just simply jobless.

Many others have already managed to move out of the country to get better opportunities, and some others have some related job, which might not be even well-paid.

Years have passed, the government was good at providing 100% free of charge contraception, specially in rural areas, and people were well-adjusted to the system of having one or two children, and having four, five or more kids sounded something odd in cities (this was still different in villages). However the dirty politics didn’t keep it that way. Considering the large number of more capable people already migrating, the population is still over 75 million, and an average life standard isn’t available for all those people, but surprisingly, these banners are up on highways in Tehran nowadays which is one of the most overpopulated cities in the world with terribly polluted air and traffic jam, etc.

Surprisingly on the last picture, you can see the mother, too! Just because bicycles are not proper with women’s hijab, so they’re not allowed to ride bikes, and a mother who does that, won’t be a good one! But apparently a boat is fine.

These posters are self explanatory on the value of women in Iran, and the whole idea is a big question mark!

The slogan says: “One sallow doesn’t not make a summer.” [so that we need more]; “More children, a happier life”.  What summer are they looking for?!

Who nurtures 5 kids properly while one is unable to stand on his own feet till even mid thirties, and cannot earn a living without his parents’ support!? Such a father wants to make 5 kids and release them in a chaos society without feeling responsible about the kid’s upbringing and their future? 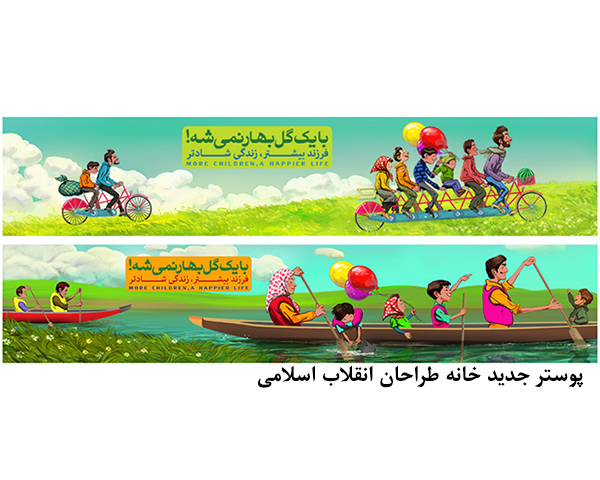